Welcome to the Roguetech Wiki

The hub of the infamous BATTLETECH mod, RogueTech!

Please note: This is not a support forum; please talk to us over on Discord for support; Discord Invite - https://discord.gg/br3RWtG 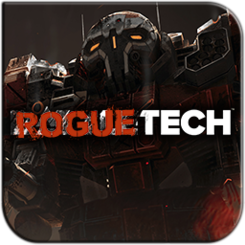 MUST BE OPT INTO Public Beta 1.2.1 in Battletech for this version!!

RogueTech has as goal to provide new challenges and a harsher sim game experience. Survive by any means necessary, because your enemies won't care if you live or die.

The timeline for this mod is at the start of 4th Succession and the War of 3039, when the the first technologies of the Helm Core appear around the sphere.

THIS MOD IS NOT SUPPOSED TO BE EASY.

ENEMIES ARE SMARTER, PUSH THE LIMITS OF THEIR MECHS, AND WOULD LOVE TO GUT YOUR MECH FROM THE REAR IF YOU LET THEM.

I mean, how fair would it be to just have the player have all these fancy toys? Highlights

Basics
- All factions are at war with each other.
- Planets offer contracts from the owner of the planet, locals and each bordering faction.
- Doing contracts for a faction raises their percentage of control and lower the percentage of the others.
- The faction with the most control owns the planet.
- If you get high rep with factions they offer you priority contracts that pay better and lead you to currently contested planets.
- The amount of % a contract moves the control is based on skulls, negotiated rep and bordering planets. Each half skull earns 2% of control.


How Does it work
- Whenever the game updates the map it makes a request to the Roguetech server and updates your lokal map based on the current state of the war.
- After each mission your computer send the result of the mission to the server and that calculates the new map.
- There is no personal information transferred and no mission result can be tracked back to a certain user.
We have 2 maps showing the current state of the war outside the game
- Map1
- Map2