When the call to arms arose from Tharkad and its Archons, and none heeded, Kommodore Gerheardt Forsythe of the LCAF stepped in to organize the remaining forces and loyal mercenary units. Rallying around the once derelict and unfinished Mjolnir-Class battlecruiser, now properly operational and dubbed Mjolnir II, Forsythe led the LCAF in a defense campaign throughout the early months of the war. At odds with the Pirate Lords of the North, dubbed the Greater Valkyrate, and with the clan invasion on their door, House Steiner held the line of the Inner-Sphere- and while they were somewhat successful in slowing the advance, they were losing ground at an alarming rate, sometimes more than a dozen planets a day. The Kommodore decided in a bid for peace, to challenge the Jarnfolk, "Clan Lutefisk" forces in hopes of repeating a Tukyiid on the small agricultural world of Montmarlault. Unfortunately, the Kommodore was unsuccessful in his 24 hour campaign, and was killed during the operation. He was later recovered by LCAF forces, and buried with full military honors on his homeworld of Richvale, somewhere outside of Chico. The LCAF currently awaits someone else to pick up the Mantle of leadership. 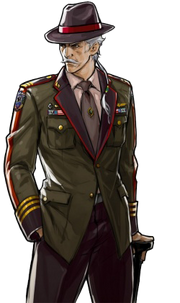 Forsythe, Candid, Sometime during the last years of his service.

Gerheardt was a calm and collected individual, noted for his sharp intellect and level head. He sought diplomatic relations with most willing neighbors, and negotiated peace and trade agreements between the Axumite Union, Marian Hegemony, and the Free Rasalhague Republic. He sheltered Kuritian and Marik refugees from their crumbling nations, a logistical nightmare at best description. He had a noted disdain for political figures; always claiming to be a soldier playing at politician- a rarity among the Lyran Commonwealth high command. He was the most outspoken voice of the failed reunification of Star-League, aiming to set the precedent of large defensive pacts, and is remembered for both supporting and openly criticizing it. He is remembered fondly by friends and foes alike as an upstanding gentleman, eccentric personality, and a genuinely helpful person.

“Gentleman, mercenaries, my friends, and to all those listening in the endless bounds of space. If you’re hearing this, then it means I’ve failed you, and I am truly sorry. I tried to be the voice of reason, of peace, and a representative of all that was good and capable in the Inner-Sphere. I sought to put us as the moral pillar of the civilized world, rather than wage a futile war wasting billions of lives and bringing pain to billions more. I chose the path of least bloodshed- and in the end, it mattered little, as even my own forces plotted against me. I wished there was another way, but I’m leaving this message, as well as many others, in hopes that you’ll be able to understand why I have to leave this time. You see, it was actually the once great man Slippy who made me realize something. There are so many stories where some brave hero decides to give their life to save the day, and because of their sacrifice, the good guys win, the survivors all celebrate and cheer, and everybody lives happily ever after.

But the hero in all those stories- they never get to see that ending. They’ll never know if their sacrifice actually made a difference- they’ll never know if the day was actually saved or if in the end, it was all for naught. They just have to have faith in those that they will leave behind- and ain’t that a bitch. So to Slippy, Takashi, and Corrine, make room for one more in hell, I’ll be joining you shortly. To McDookie and Hiroe, the bastards that left us out to dry all this time, I hope you reap what you sow. To the Steiner forces rallying for war, I warn you that this is a path of self destruction. And for the rest of the friends and other’s I leave behind, good luck wherever you choose to go- I ask that you only fight for what you believe in.”

House Steiner regularly has fifteen to thirty active players from around the globe participating in the Online Roguewar conflict. You can find their discord community at the following discord link: https://discord.gg/nPxHqdJr9m