This page provides an overview of the user interface in RogueTech. 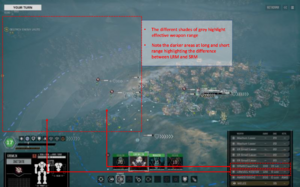 Whenever you move your mech around the map you will see a semi-transparent cone which represents the firing arc of your weapons. Different shades of white indicate the overlapping effective range of weapons: the darker the shade, the higher the potential damage output. In order to see the range bands for one particular weapon or set of weapons, you can toggle the others off during your move phase.

When targeting an enemy mech or vehicle, the line's color communicates the following:

The direction of attack and the presence of obstructions affect accuracy in different ways, details can be found in the Accuracy Guide.

In game you will often see circles of varying colors around your mechs - these are called Auras. They show the area of effect for various equipment.

To toggle auras on/off, press Ctrl+A while in combatgame.

Heat now affects mechs on a sliding scale that starts with maluses to movement and gunnery before you begin making heat-related failure rolls. Be aware these penalties start before you hit the displayed heat threshold, which is now constant and pegged to the heat level which would provoke a shutdown roll, so continuing to ride just underneath your threshold means continuing to accept penalties to accuracy and movement.

For more information on how heat works, see the Heat Effects page.