Battletech game is all about shooting enemy mechs, right? And in order to kill and not get killed you need to shoot more accurately than your enemy. This guide explains how shooting works in RogueTech, which modifiers exist and how they stack together.

Some key points to note where RT differs from vanilla, and why it seems more difficult.

The goal of these changes is to ensure that the game mostly resembles the 2d6 chance curve that CBT/TT uses, and more importantly, show it to the player. 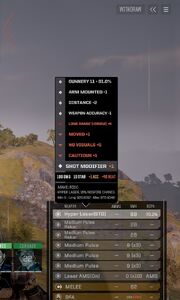 A firefight in RogueTech is like a tug-of-war game: the base accuracy to hit a target is 80% and all your and your enemy actions and decisions provide either positive modifiers or negative modifiers and the goal is to have the sum of the all the modifiers to be as high as possible.

RogueTech has a very convenient UI to manage accuracy of your units:

Weapon Tooltips list 3 ranges: Minimum, Optimal, and Maximum. All ranges below the listed minimum suffer the listed +8 penalty. Short and Medium ranges are between Minimum and Optimal, while Long and Maximum (also referred to as Extreme Range) are between Optimal and Maximum. Most (but not all) weapons have the divide between Short/Medium and between Long/Extreme at the halfway points in those ranges, but some weapons - such as Snubnosed PPCs and Artillery - have different behavior.

Weapon damage falloff begins at optimal and reaches its maximum value at the end of the weapon's range.

In RogueTech mech movement speed is represented by small chevrons - Evasion Pips. The table below shows the number of Evasion Pips a mech gains for a certain distance travelled.

By default each mech can gain maximum of 6 Evasion Pips from movement. This limit can be increased by various pilot skills and equipment traits. Hover over the durability bar in mechbay to see what your mechs max is currently, will not count activated tech/abilities.